1st Tuesday of Every Month 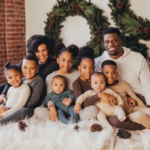 Kirsten Watson is a daughter of the King, wife of retired 16-season NFL player Benjamin Watson, Mommy to 7 kiddos, author and executive editor of Mom Life Today. After graduating from the University of Georgia with a degree in Marketing and Spanish, Kirsten worked for a Fortune 500 company and then entered into the nonprofit arena. With Benjamin she founded the One More Foundation, which is devoted to spreading the love and hope to “one more” soul. After many moves across the US, she is now CEO of a family of 9. She is a self-proclaimed “Foodie” who loves time with family and friends having deep conversations about life and Kingdom building. She has a heart for young girls and women and truly desires to speak truth in love when it comes to navigating life.

Benjamin is a 16 year retired NFL star, husband to his wife Kirsten for 16 years, Daddy to 7 kids, ESPN sports commentator, author, and a voice to the voiceless. Benjamin was a key playmaker for teams such as the New England Patriots, Cleveland Browns, Baltimore Ravens and the New Orleans Saints. His passion for football mirrors his passion for giving back. Through their foundation One More, he is devoted to spreading the love and hope to “one more” soul. Benjamin has authored 2 books, Under Our Skin, which garnered critical acclaim and eventually led to the release of his highly anticipated second literary work, The New Dad’s Playbook. Presently, Benjamin works with ESPN on the SEC Network, the Human Coalition, and hosts a podcast with Kirsten titled Why or Why Not with the Watsons